Sustainability’s In Session at Mitchell College

Located in New London, CT, Mitchell College is a private liberal arts school with a tight-knit community of just over 800 students, faculty and staff. In 2019, the college planned to optimize their HVAC and lighting systems but were unable to fit the efficiency project within their capital plan. Energy conservation was – and remains! – important to the school. Though they wanted to start retrofitting and replacing their aging systems a couple of years ago, the budget of their initial project was originally too high; it needed to be as tight as possible to keep tuition costs down.

Fast forward two years; the state of Connecticut enhanced its utility incentive programs, in part due to the effects of COVID-19. With the support of Mantis Innovation’s turnkey project management, Mitchell College was able to complete a comprehensive lighting and mechanical project with a short payback period and at half the initial cost.

“By choosing to do a comprehensive project and work with [the Efficiency Solutions division of Mantis Innovation], we were able to obtain more incentive dollars than we would have gotten with a smaller project or less experienced company. Being able to complete these projects has resulted in significant sustainability benefits for our campus.” 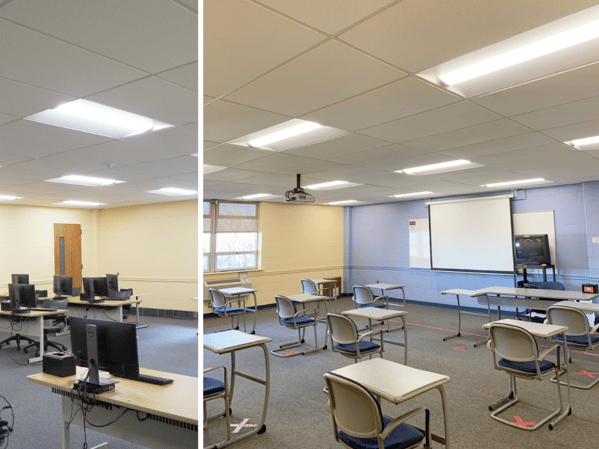 The existing lighting system at Mitchell College consisted of incandescent fixtures that are notorious for being short-lasting and inefficient. They require constant replacement which created a significant maintenance cost for the school as they were frequently purchasing new lighting fixtures and spending time replacing old ones. To combat this challenge, we replaced the existing fixtures with LEDs which require 70% less energy consumption and typically have a rated life of well over 50,000 hours. This was critical for a school with multiple classrooms, resource centers, and student housing.

As installations can be disruptive to the routine of faculty and students, our lighting team needed to be especially cognizant of scheduling. This required frequent and effective communication with faculty to work around classes to best mitigate the disturbance to the students. In addition, the Mantis lighting team was navigating the installation partly during the COVID-19 pandemic, necessitating even closer communication with the school to maintain the safety of everybody involved.

Environmental Equivalent of the Lighting Solutions

845,500 total annual kWh saved at Mitchell College is the environmental equivalent of:

Located in the Clarke Center on campus, the mechanical room originally hosted two large oil-fired boilers. The larger boiler was mainly used during the winter season for both domestic hot water and heating. The smaller of the two was used all year for hot water on campus. The staff at Mitchell College encountered similar problems with these boilers to the lighting; they needed frequent maintenance and produced high carbon emissions.

To solve this problem, we sustainably disposed of both boilers and replaced them with two gas-fired condensing boilers and two gas-fired water heaters. So now instead of two big pieces of machinery, four much more efficient units sit in the mechanical room and take up less than half the space. For the sake of the staff’s convenience, we programmed the boilers and heaters to connect to the building management system.

Redundancy is Necessary for Smooth Operations

Having two units for each job allowed for redundancy as failure of one of the units will not cause major issues. For example, if the existing boiler – that was previously used year-round – failed, the kitchen would not have access to hot water which would be problematic as it serves as the main food source for students on campus.

Redundancy also allows for the equipment to share the task and mitigate exertion. I like to use the running shoes example: If you’re an avid runner, you own two pairs of running shoes and alternate between them. By doing this, both of your shoes will last longer. We applied the same theory to these HVAC systems. By having two units alternate in exertion, they will last much longer.

One challenge my team faced during this project was turnaround time. Our work was done during the colder months (heating season) when the boilers and heaters would be in high use. This meant the removal of existing equipment and installation of new machinery had to be executed as fast as possible.

Environmental Equivalent of the HVAC Solutions

4,200 total annual therms saved in this HVAC project at Mitchell College is the environmental equivalent of: 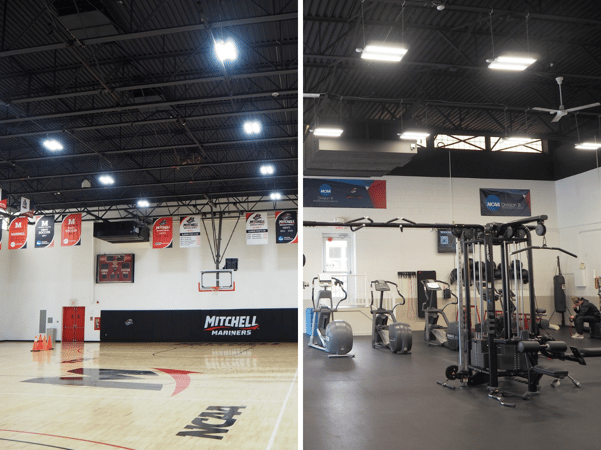 The Financial Savings of a Comprehensive Energy Efficiency Project

The results of this project will save Mitchell College around $187,000 annually. The Efficiency Solutions division at Mantis was able to deliver a comprehensive project with three separate savings measures which equate to better savings all around. Comprehensive projects translate to high incentive dollars; for this school, it meant $643,000 in utility incentives.

By taking advantage of the state’s utility incentive project, they were now able to retrofit their lighting to increase efficiency and add controls as well as improve the infrastructure on campus by implementing new boilers and heaters. All of these upgrades were completed with 60% of the cost covered. And now, the efficiency benefits and sustainability outcomes of the project will benefit staff and students for years to come.

Breaking Down Demand Response You know those days where the temperature feels like you’re a mile away from the sun and you’re counting on your air conditioning units to get you through the day? Or

Energy Pricing in Deregulated Markets and Its Inherent Risk

Assessing risk in your energy spend can be complicated but by understanding what makes up your energy pricing—whether electricity or natural gas —and the factors that influence it, is the first step

The Basics of Energy Procurement

In this blog, we’ll give you a foundation for understanding energy procurement in the United States and how it can differ from state to state and between different energy sources. At a high level,

What Makes Up Your Energy Spend

More than just the price you’re paying for the energy you’re using, what makes up your organization’s energy spend is a confluence of three primary factors that interplay with each other. Energy